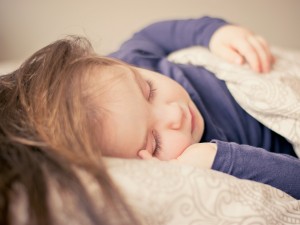 I have a running joke with a co-worker in which he tries to guess how many hours of sleep I have gotten the night before. Lately, that number has ranged from 2 hours to 6 hours. For the past few weeks, I have to admit, I’ve been stumbling about barely functioning.

Could it be that it’s my own fault?

In the years prior to having children, I was mostly a good sleeper. I slept a solid 8 hours a night, rarely waking. Even during my first pregnancy, it was rare that I woke up.

So, it’s interesting that the American Academy of Pediatrics just published a study about whether or not the parent’s poor sleeping habits are pushed off onto their child.

Which brings me back to the question: Could it be that my current sleep troubles are own fault?

I suffered from insomnia in high school. Badly. I was a worrier. I would lie in bed unable to sleep worrying about everything from tests to my parents to my brother’s health.

In college, I didn’t sleep enough. I worked full time and went to school full time. In short, there simply wasn’t enough time to sleep a full eight hours.

After college, I took up running. That’s when I really started to sleep well. I was eating well. I was exhausted, and I could sleep 8-10 hours without interruption. Then, I turned to cycling. Same result. So, during that first pregnancy as I continued to spin 45-60 minutes per day, sleep was easy as can be.

Now, I never get in a run and I rarely cycle (even though there is a stationary bike sitting in my living room). I do get in really long walks and hours at the playground. And I’m exhausted because of that. I’m wondering if those are the days that I have decent sleep.

Last night is a great example. I was so tired I fell asleep with my little girl around 8:30 p.m. For no reason at all, I woke at 1:30. (A solid five hours, which felt amazing!) So, of course, I check on both babies, get a drink of water and head back to bed wondering if I should get up and “do” something. Soon, it’s 2:00 a.m. The little guy stirs and I get up and re-settle him. Now, 2:30. I fall back asleep. My daughter wakes at 4 and wants milk. Disaster. The milk spills in the bed. She’s upset and doesn’t want to sleep. 5 a.m. arrives and the little guys wakes to eat. I get up change him, feed him and get back into bed at 5:30 where my little girl is still waiting for me. She asks to hold my hand before she drifts back to sleep right before 6. At that point, I just get up.

I’m wondering though if my waking at 1:30 set off that chain of events. Perhaps I wouldn’t have heard my little guy moving about and jumped up to resettle him. Who knows?

It makes me think of the advice I’ve heard to move them from my room. Sigh. I’m not sure I’m ready for that yet!

The researchers also note that other studies have shown that the child’s poor sleeping causes poor sleep in the parents. Further, they posit that parental well-being and pediatric insomnia may be reciprocal.

Further, sleep difficulties have been shown to cause an attention-shift toward sleep-related difficulties, according to researchers. This may cause parents to remember more of their night-time wakings.

Researchers also state that tired parents may unconsciously exaggerate children’s sleep difficulties, which leads to interventions that may not be needed or helpful.

(You can read the entire study here.)

After reading this, I’m really going to have to consider my own sleep habits and whether they are affecting how I perceive my children’s habits. With two babies under two, there is no mistaking that I am exhausted. And my mommy radar is never turned off.

I also have to note that the children in this study were older than both of mine. I realize that I have babies still and babies wake up.

So for now, I will be content with my coffee.